Join the Beautiful Destinations team as we explore beyond the borders of this ancient kingdom and explore the unique worlds of its incredible people. From a trailblazing female archer to a conservationist who has planted over 100,000 trees, and from artisan papermakers sustaining 300-year-old traditions to dancers who move with the songs of centuries past, these are the stories of the people of Bhutan.

ON SONAM DEKI, BHUTAN’S TRAILBLAZING FEMALE ARCHER
In Bhutan, archery has become more than just the national sport — it has also become a platform for discussions on gender equality. As a female on the national archery team, Sonam Deki is challenging some of the country’s outdated customs and paving the road for women in the previously male-exclusive competition.

Deki and her team train eight hours a day, sometimes shooting as many as 300 arrows in a single practice. During competitions, they shoot at targets sitting 145 meters away (on the Olympic level, targets lie at half the distance). Deki has already made incredible strides since joining the team in 2014, but her biggest dreams — joining the 2020 Tokyo Olympics and becoming a coach — still lie ahead.

ON THE “MASKED DANCE OF THE DRUMS”
Drametse Ngacham, “the masked dance of the drums,” was once believed to have been performed by heroes of the celestial worlds. The vibrant masks of the dancers feature intricate details and elements inspired by animals — both real and mythical. The dance, a tradition passed down through five centuries, is considered an art form and is performed, to attract blessings, twice a year at the Drametse Ngacham festival — though it's also used on special occasions for good luck. It's thought to be a mechanism for spiritual empowerment and something the Bhutanese believe everyone should see at least once in a lifetime.

ON ATA SONAM AND A LIFE DEDICATED TO TREES
Atam Sonam’s dedication to the forests started from an early age. Though now retired, Sonam still devotes significant time to protecting and caring for Bhutan's trees. Over the last 35 years, he has planted more than 100,000 trees in and around the Thimphu Valley to combat the effects of climate change — last year alone, he planted more than 300! He is a shining light in the country’s initiative to keep at least sixty percent of its land forested at all times — an effort that has contributed to the country’s status as the only carbon-negative nation in the world.

ON PRESERVING ANCIENT PAPER-MAKING
While used countrywide today, historically, this extensive practice was only used to create scriptures and prayer books for monks. The paper is crafted from Daphne — a plant only found in the Himalayan region — and harvested sustainably to ensure regrowth. Over 300 people are involved in cooking, cleaning, and processing the plant to paper. The seven-day operation is truly an art form; its artisans train for 10 years to master the craft. And while using practices from the 17th century may not be the most practical route, this craft demonstrates the country’s steadfast dedication to preserving its heritage and — with its chemical-free process — also helps to protect the environment.

ON THE CULTURE OF BELIEF
Bhutan is a country of ancient tradition, of scared earth, of unfaltering belief. And while the majority of the population, almost three-quarters, practices the country’s official religion, Vajrayana Buddhism, its spiritual beliefs extend far beyond that — honored in traditions passed down through generations.

One such custom transpires along the winding curves of the Chele La Pass, 2088 meters above sea level. Patrons arrive to burn incense in offering and murmur prayers as they tie flags to poles that jut high above the dusty earth. This custom is performed to bring luck, prosperity, and peace to a family, its community, and all living beings in the world.

SPECIAL THANKS TO
Ashik Bajgai and Bhutan Peaceful Tour | www.bhutanpeacefultour.com 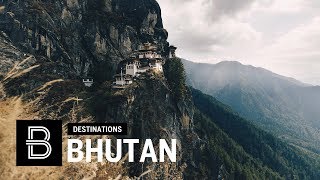